Alan Kohler: Murdoch and the BCA are providing cover for Morrison. Good 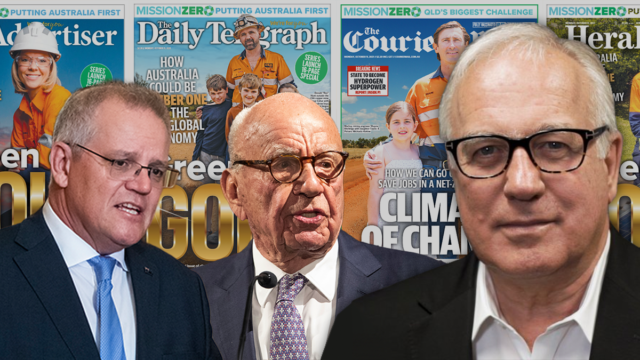 Say what you like about Matt Canavan. At least he’s consistent.

That is, unlike his boss, the Prime Minister, News Corporation, and the Business Council of Australia.

We should be grateful they have finally seen the light, but it’s hard not to go into the back yard and shout at the Moon over their destructive, cynical, stupid, decades of intransigence.

The question now is whether the sudden enthusiasm for deep emission cuts from the Murdoch newspapers and the BCA will give Scott Morrison enough cover to come up with a proper climate change policy, as opposed to a non-policy.

A non-policy would be an announcement that Australia is already on track for a 40 per cent reduction by 2030 and will easily make net zero by 2050, thanks to technology, plus the actions of the states and Australian businesses, for which the Prime Minister will take full credit. Ta da!

Oh, and to compensate for these non-efforts, $250 billion will be handed to the National Party to spend in Queensland and New South Wales so a few of them don’t cross the floor and blow up the Morrison majority of one.

Alternatively, and more optimistically, maybe Scott Morrison really did ask Rupert Murdoch for help when he was in New York, and he’ll use that help – already evident – to announce something that would mean Australia won’t be laughed at in Glasgow.

A proper national climate change policy would be legislation that reduces the baselines of large-scale emitters each year so they have to cut emissions or buy more Australian Carbon Credit Units generated by those who do cut.

The spot price of ACCUs has already spiked to $30 a tonne with a tripling of trading volume in just three months, so emissions trading has already taken off in this country because so many companies are now trying to pacify their increasingly bolshy (on this subject) shareholders.

So much so that the Clean Energy Regulator that runs the ACCU scheme has been running a tender process looking for someone who knows how to run a big and active market. The ASX, among others, is bidding.

So Australia already has an active emissions trading scheme, and it’s getting more active every day.

All the government has to do to have a credible net-zero policy is to tighten it.

Coal-fired power stations have to close, which is the point, and other industrial emitters would have to either capture their carbon, use different technology or buy ACCUs for $30 a tonne, and rising.

Will the government do that? Of course not, at least not now.

But the Coalition’s pivot on climate change may have only just begun: This week’s position presented to the National Party on Sunday won’t be the last and COP26 in Glasgow won’t be the “last chance saloon” that Prince Charles called it this week.

It took John Howard three years to make the same pivot in 2006, so that he went to the 2007 election with an emissions trading scheme as policy.

But there has been 11 years of frenzied cynicism since Tony Abbott replaced Malcolm Turnbull as leader in 2009, and pro-coal, anti-renewable ideology has become deeply embedded in the Coalition.

By the way, the reason for the pivot this time is the same as it was in 2006: Business pressure.

John Howard was quite open about that but it turned out to be temporary – business groups fell in behind Tony Abbott and the rest of the wreckers in the Coalition.

This time it’s come from a broad groundswell of investors, large and small, pushing the companies they own, and it is obviously permanent.

As Treasurer Josh Frydenberg said in his recent speech to the Australian Industry Group, institutional investors like BlackRock, Fidelity and Vanguard are committing to net zero, and Australia relies on imported capital.

The Treasurer said: “We cannot run the risk that markets falsely assume we are not transitioning … Were we to find ourselves in that position, it would increase the cost of capital and reduce its availability…” (Gotta love that “falsely”).

The same pressure is motivating News Corporation and the members of the BCA but has not yet percolated into the sanctum of the National Party, where Blackrock, Fidelity and Vanguard are someone else’s problem.

Maybe there’s a halfway house between proper policy and non-policy.

Tristan Edis of Green Energy Markets says one idea would be to add a subsidy for household batteries to the Small-scale Renewable Energy Scheme that subsidises rooftop solar.

Edis says that by 2025, renewable energy output in Australia will regularly exceed total power demand between noon and 3pm, so for the growth in rooftop solar to translate into emission reductions some of it needs to be stored for later. If that happened, it would cut Australia’s overall emissions a lot.

Perhaps there could also be a CO2 standard for vehicle emissions, in line with the one in the US, which would speed up the switch to electric vehicles.

Looking at the concerted “Green and Gold” splash by the News Corp tabloids on Monday pushing net zero, it’s hard to escape the feeling that Scott Morrison asked for solid covering fire to announce something big, so anything’s possible.

We can only hope.

The post Alan Kohler: Murdoch and the BCA are providing cover for Morrison. Good appeared first on The New Daily.

What to expect from New York Fashion Week?